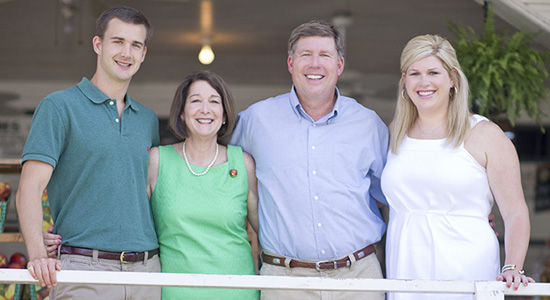 Robert Dickey is currently serving his fourth term in the Georgia House of Representatives where he serves the people in Bibb, Crawford, Houston, Monroe and Peach Counties.

Upon his election, Robert rolled up his sleeves and went to work for the people of Middle Georgia. He has been recognized as one of hardest working members of the Legislature and has quickly earned the respect of his colleagues. That’s why he on the rise in House, serving as a Vice Chairman of an Appropriations Subcommittee, Secretary of the Agriculture Committee, member of the Banks and Banking and Energy and Telecommunications Committee. A natural leader, Robert was also appointed to serve as a Deputy Majority Whip in the House.

Robert Dickey has proven to be an effective voice for Middle Georgia.

With his father, Representative Dickey owns Dickey Farms, Inc., a 3,000 acre peach and timber farm that has been in his family since 1897. Dickey Farms is a local tradition that has supported our local community and created jobs for generations of local families.

Representative Dickey represents the peach industry both statewide and nationally. He is a current board member and past president of the Georgia Peach Council. He has also served as president and treasurer of the National Peach Council. Representative Dickey was a member of the Leadership Georgia Class of 1990. He was a founding board member for the Georgia Agri-Leaders Forum, an agricultural leadership course that currently trains individuals in agriculture and agri-business industry. He believes in educating others interested in the farming industry. Representative Dickey served on the Governor’s Agricultural Advisory Board from 2002 to 2010.

Representative Dickey was elected to the Flint Energies Board of Directors in 1994 and served until his election where he was the Vice Chairman. He was a founding member of the Crawford County Chamber of Commerce and served as a board member. He has been active in economic development for this area and served on the Crawford County Industrial Authority for the last twenty years.

Representative Dickey is a member of the Board of Directors of the SunTrust Bank of Middle Georgia and on the board of the Gordon College Foundation. He is also a member of the Middle Ocmulgee Regional Water Planning Council and a board member and past President of the Crawford County Farm Bureau.

He received his Bachelor’s degree in Business Administration from the University of Georgia in 1976 and his MBA from Georgia College in 1989.

Robert and his wife, Cynde, have been married for 40 years and have two adult children and one granddaughter. They are active members of Musella Baptist Church, where they both teach Sunday School. Mr. Dickey is a Deacon and chair of the Finance Committee.